The end of the year is coming even closer and my plans for the following year are definitely on slow simmer. One thought I’ve had is to channel my reading as I did a couple of years ago when most of what I read was 19th century.

I really enjoyed that, with the result that next year I think I’m going to use the list in the book 1001 Books you Must Read before you Die . The list is now 1294 books long as it should be to keep up with new books … but who’s quibbling.

Together with some work mates we went through the list to see how many we’d already read. I was happy to find around 100 of the first 1001, so about 10% in my case.

Adding this to my New Year’s Plans list and making my way through a few more … and maybe adding a few reviews to the blog. That’d be fun.
Posted by Snooze at 9:10 PM 44 comments:

My other blog (EAT AND BE MERRY, FOR TOMORROW WE DIE(T)) has a double pass valued at $300 for the Melbourne STREAT Dinner Party to be held on Tuesday 29 November.

STREAT is a fantastic charity helping Melbourne's homeless youth to long-term careers in hospitality through running street cafes. For around six months they learn hygiene, kitchen etiquette, how to cook and how to follow a recipe while working on one of STREAT's cart. And all the proceeds from the STREAT Dinner Party go to funding a new STREAT cart.

Leave a comment (one only per person) over at the post on EAT AND BE MERRY and a lucky winer will be drawn randomly on Friday 25 November at 7pm. The giveaway is open only to Melbournites who can attend.

Sometimes flea market finds are sexy, amazing, stunning; and sometimes the "flea market fairy" points me in a far more practical and useful direction ... like this week with three big glass jars that can be used for storing lots of things.

Mr H, you see, has decided to preserve lemons, and alas, for his first effort a few months ago, all we could find in the cupboard were a couple of smaller jars, including this one with a metal lid ... and not a great choice when you're dealing with caustic elements like lemon juice and salt but ... needs must. 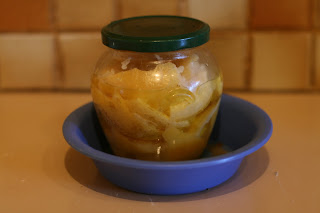 Now we no longer need to worry about that as I found not one, but three, large ex-coffee jars between the nine op shops I managed to get to this week ... in about three hours! (Poor Mr H ... I've already snaffled two of them for sugar!) 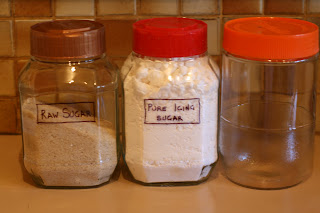 And just so you know they're out there if you're interested in glass jars ... Mr H and I found this huge glass jar a few months ago (we now have three which store SR and plain flour, and the "newer" one for regular sugar). 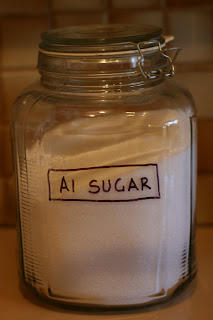 I can't wait to find more because I love the sturdiness of these jars (and because I need to find at least another one for Mr H), and maybe next week I'll be a little luckier with the vintage sheet finds. Can you believe I've been to 11 op shops over the last week and I managed to find only one sheet worth getting for the swap: a pretty but slightly faded striped lilac sheet? Lucky I have almost no purple/lilac sheets and I love stripes so I was excited all the same.
What have you been up to? Find anything good ... or did the "flea market fairy" not smile on you? Lots more flea market finds over at Sophie's place.
Posted by Snooze at 8:26 AM 20 comments:

This list of funnies landed in my inbox today ... apparently they're puns for educated minds!

I'm quite partial to numbers 13 and 18. Do you have a favourite and why?

1. Was the fattest knight at King Arthur's round table - Sir Cumference? – and did he acquired his size from too much pi?
2. Would an eye doctor on an Alaskan island be an optical Aleutian?
3. She was only a whiskey maker, but he loved her Still.
4. Would a rubber band pistol be confiscated from algebra class, because it’s a weapon of math disruption?
5. No matter how much you push an envelope, it'll always be stationery.
6. If a dog gave birth to puppies on the road would it be charged with littering?
7. Would a grenade thrown into a kitchen in France result in Linoleum Blownapart?
8. If two silk worms had a race – would they ended up in a tie?
9. If a hole was found in the nudist camp wall, would the police look into it?
10. Although time flies like an arrow - fruit flies like a banana.
11. Atheism is a non-prophet organisation.
12. Two hats were hanging on a hat rack in the hallway. One hat said to the other: 'If you stay here; I'll go on a head.'
13. I wondered why the baseball kept getting bigger. Then it hit me.
14. Would a sign on the lawn at a drug rehab centre say: 'Keep off the Grass.' ?
15. If a midget fortune-teller escaped from prison, would there be a small medium at large.
16. If a soldier survived mustard gas and pepper spray – would he be a seasoned veteran?
17. Does a backward poet write inverse?
18. In a democracy it's your vote that counts. In feudalism it's your count that votes.
19. When cannibals eat a missionary, do they get a taste of religion?
20. If you jumped off a bridge in Paris, would you be in Seine?
21. If a vulture boards an airplane, carrying two dead raccoons. Would the stewardess tell him “there’s only one carrion allowed per passenger.'
22. Two fish swim into a concrete wall. One turns to the other and says 'Dam!'
23. Two Eskimos sitting in a kayak were chilly, so they lit a fire in the craft. Unsurprisingly it sank, proving once again that you can't have your kayak and heat it too.
24. Two hydrogen atoms meet. One says, 'I've lost my electron.' The other says 'Are you sure?' The first replies, 'Yes, I'm positive.'
25. If a Buddhist refused Novocain during a root canal – would his goal be to : transcend dental medication?
26. There was the person who sent ten puns to friends, with the hope that at least one of the puns would make them laugh. No pun in ten did.
Posted by Snooze at 6:59 PM 10 comments:

In the absence of any red photos I wandered down to Union Lane, of course, to see what street art was around. 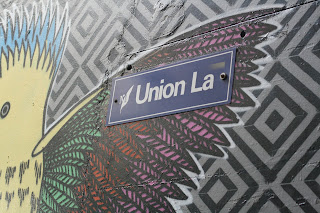 There were a few new things but nowhere near as much good stuff as usual ... and very little had any red, except this little darling. 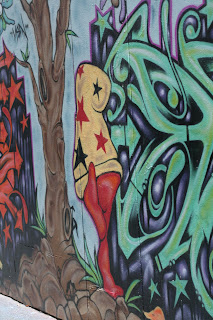 I'll just share a few more because I was there, not because they're red.

Do you think this is the cowardly lion? 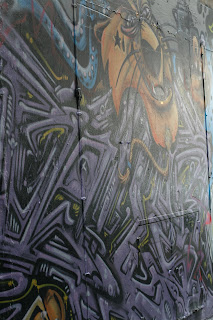 This girl's so stylish and elegant. 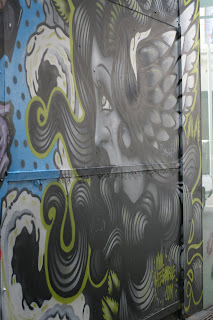 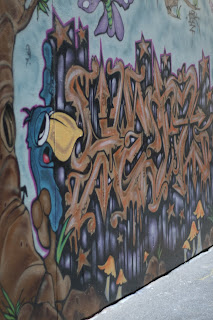 and this girl's gorgeous too. 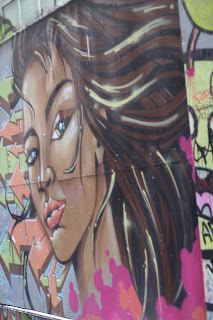 This girl looks a lot like a Debs ... but she's not! I'll check out the name next time I'm there. 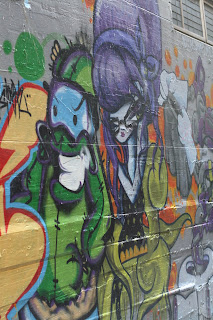 For more ruby redness ... visit Mary at Work of the Poet.
Posted by Snooze at 8:52 PM 5 comments:

I managed to pick up some gorgeous pyrex and glasbake this weekend from two separate op shops ... and think myself very lucky. I almost didn't find the blue pyrex dish and it's so pretty. It was inside another dish with a lid on that and it was a fluke I looked inside it because it was so ugly! 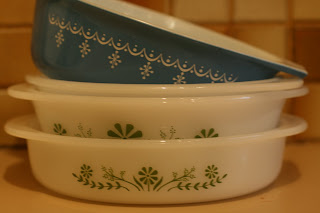 So I had to use them ... the blue pyrex held our vegetarian beans in homemade tomato sauce. Very yum! 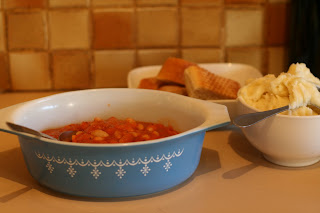 And an apple and rhubarb crumble in the largest of the glasbake dishes. I gently cooked the apple and rhubarb in a little brown sugar, orange peel and cinnamon stick, which turned our nice. The crumble didn't turn out so good, but I didn't make it. It needed more butter but Ms C had to make it her way! Them's the breaks! 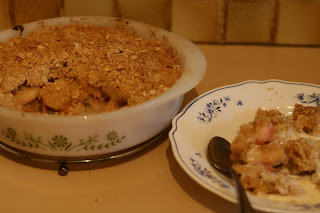 I hope everybody had a great weekend and if you'd like to play or see more flea market finds ... visit Sophie.
Posted by Snooze at 8:32 PM 9 comments:

Union Lane in the city is an interesting place.

For a start it's right in the centre of town running between one of our premier department stores (David Jones) and other stores. It's narrow and awkward since it doesn't really have a purpose in the way as it once would have.

But I love the way the building walls act as an art canvas and the lane as the venue for performance art.

And so it was one quiet lunchtime as I walked down the lane on my way to my favourite yarn store.

What I was faced with was a pile of balloons filled with water and glitter sitting on upended milk crates ... and several more stacks of crates and balloons along the lane. 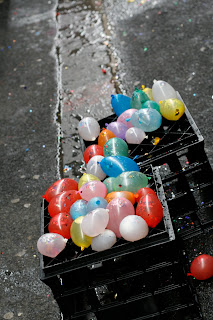 And was it all about? Performance art ... with balloons to throw at the walls and add glitter to the street art. 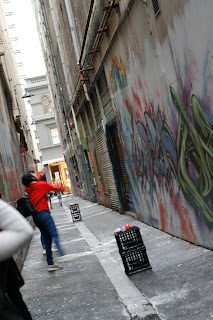 Or to throw at each other. It didn't really matter much. 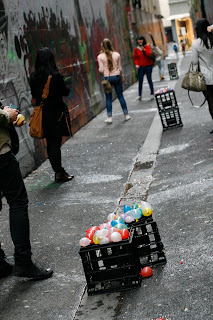 It was fun either way.

Interested in more red ... visit Mary at Work of the Poet for more.
Posted by Snooze at 8:13 PM 6 comments: 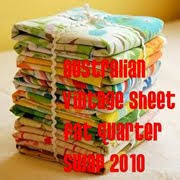